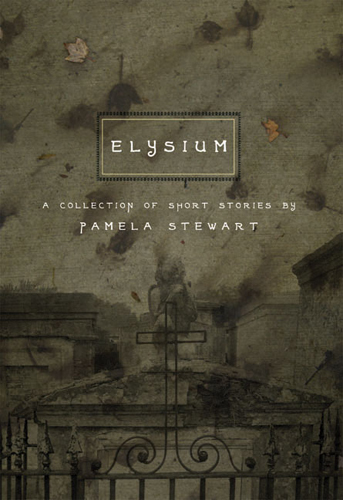 Pamela Stewart is a self-described âliterary proctologist,â and her writing often looks into places that people generally donât want to look. The stories in Elysium are about the difficulties of life we all encounter as human beings, the fragility of lifeâthe physical, mental, and spiritual challenges we must try to overcome. They are about ordinary people, characters searching for meaning. People are rescued, but not always in the way they hoped for or expected. Stewartâs work is character-driven and empathetic.

Pamela Stewart spent twenty years as a private investigator, which gave her a special insight into human behaviour. âBecause I spent so many years alone in a car watching people, my perspective on people is a bit different. I would watch someone for three or so days in a row, and in that time get a capsule version of their life; but it was skewed because I was part of their life, yet not part. They didnât know I was in it,â she says. âWriting about people is kind of like that too.â

lives in downtown Toronto. Her stories have been published in Ars Medica, Descant, Other Voices, subTerrain, and Rosebud. She took second place in the Toronto Starâs short story contest, and she was short-listed in the 3-Day Novel Contest.

In addition to writing, Stewart is a photographer and has had her photography exhibited at various venues and published in a variety of magazines. Sheâs been involved in social activism and causes for social justice, in particular as a peace activist. She also makes jewellery and has her own business, Pamelaâs Planet, with a portion of proceeds going to charity. She attends Quaker meetings, and is a breast cancer survivor.